Information
Where We Are 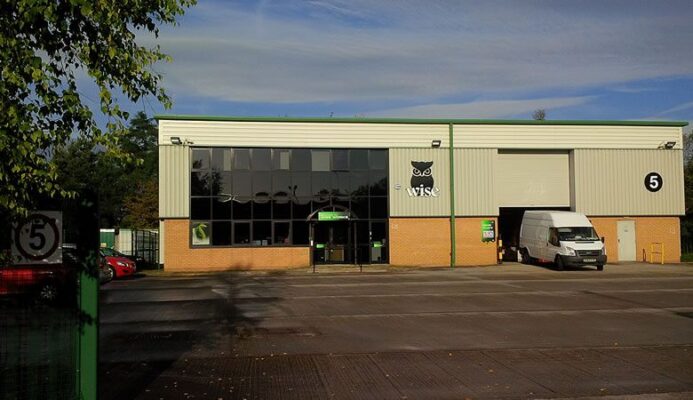 Oil and gas production and work in confined spaces exposes field personnel to a variety of toxic and explosive gases in every day drilling, processing, transport and municipal operations. Explosive gas build-ups can endanger not only the workers nearby, but also a widespread area beyond the working area, making fast, accurate measurement of combustible gases below LEL levels critical to maintaining safety. Today, there are two main sensor technologies used for detecting explosive gases: catalytic bead and infrared.

Catalytic bead, or “pellistor”, sensors were developed in the 1960s as a more accurate replacement to canaries as early warning systems for toxic and explosive gases in mines. The sensor design features a platinum coil embedded in a catalyst coated alumina bead (Diagram 1). A gas sample oxidizes, or combusts, upon contact with the catalyst, causing the temperature of the bead to increase, which in turn causes the resistance of the platinum coil to change. The measured change in resistance indicates the amount of combustible gas present. 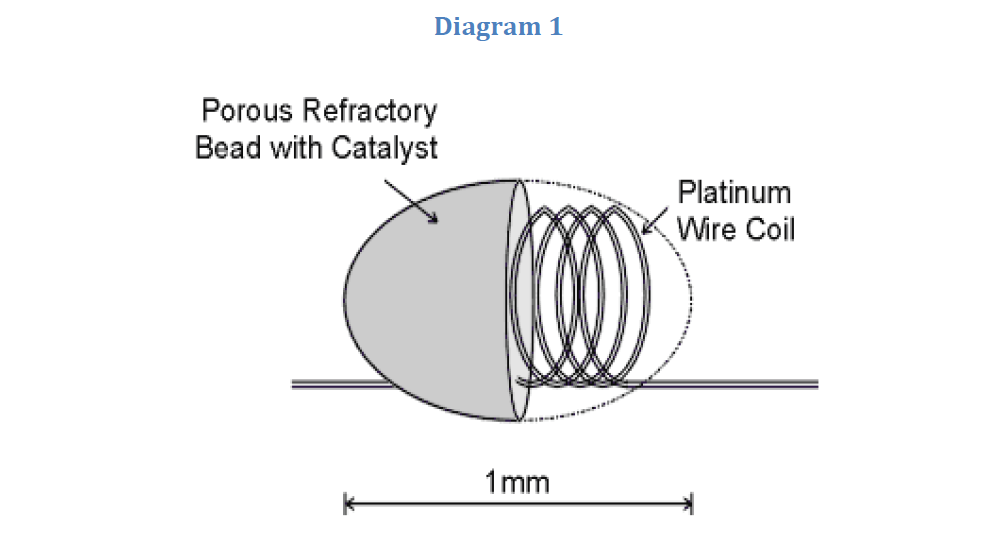 The sensor responds differently to different types of combustible gases due to four main causes:

1. Heat of combustion. Different gases burn, or combust, at different temperatures, causing different amounts of heat to be transferred to the bead, and thus different changes in resistance through the platinum coil.

2. Lower Explosive Limit (LEL) volume. Each combustible gas has a particular concentration in air at which it becomes explosive. When a sensor displays a percentage of LEL readout, it is based on the LEL concentration for a specific reference gas. It is no surprise that the gases with a higher v/v percentage required for their LEL also have higher signal outputs on catalytic bead sensors.

4. Catalyst-gas reactivity. Combustible gases react differently to different catalyst coatings. One coating may react strongly to a particular gas, but only weakly to another gas.

Though they’ve been in use for over 60 years, catalytic bead sensors have changed very little over time. Most improvements have been focused on the catalyst materials used to coat the alumina beads along with the reduction in bead size to reduce required power, but the majority of the design remains unchanged.

During normal sensor operation, gases reacting with the catalyst can consume the catalyst coating, gradually degrading sensitivity and causing signal drift, and reducing the lifespan of the sensor. Because of this, catalytic bead sensors have a typical lifespan of 3-5 years (most are warranted for two years) and must be calibrated and tested as frequently as every day and no less than every 90 days.

Catalytic bead sensors are also susceptible to poisoning by a variety of materials commonly found in oil and gas applications including silicone vapors, sulfur compounds such as hydrogen sulfide (H2S) and halogenated hydrocarbons, including those used in fire suppression. These chemicals reduce and eventually completely degrade the sensitivity of the catalytic bead sensor until it fails to react to gas at all, a potentially hazardous condition.

Because catalytic bead sensors combust the target gas within the sensor cell, they are not typically intrinsically safe, and a flame arrestor must be used to prevent ignition of environmental gases. This flame arrestor significantly reduces sensor response to large hydrocarbons, such as those found in diesel gasoline and jet fuel, and the sensor will read low even in high concentrations of those gases. Oxygen must also be present in the environment for the target gas to combust; pellistor sensors will not work in the inert, oxygen-depleted atmospheres used in many oil and gas operations.

Catalytic bead sensors require around 225mW of power to operate. For the average portable four-gas detector, the catalytic bead type LEL sensor typically accounts for more than half of the total power draw of the unit which results in typical run times of 10-20 hours before a detector must be charged.

In more recent years, non-dispersive infrared (NDIR) sensors have emerged as an alternative for the aging catalytic bead technology. Infrared sensors consist of a gas cell through which infrared radiation passes (Diagram 2). Gas molecules in the cell absorb certain frequencies of radiation in the bonds between dissimilar atoms (carbon and hydrogen, for example). Dual infrared radiation detectors within the gas cell measure the amount of radiation transmitted through the gas (active detector). The reference detector measures a specific IR wavelength that is not absorbed by either the target hydrocarbon molecules or possible interfering molecules, such as water vapor, to compensate for any interfering factors such as dust and humidity. The difference in radiation measured by the two detectors indicates the level of gas present.

Photodiode powered NDIR sensors are intrinsically safe and don’t require the use of a flame arrestor. This more easily allows large hydrocarbon molecules to be detected. Since the gas is not reacting with chemicals, the sensor is immune to poisoning. Additionally, unlike catalytic beads which require oxygen to operate, NDIR sensors can be used in reduced-oxygen or even inert environments. Recent advances in NDIR sensors have replaced the traditional incandescent radiation source with photodiodes (similar to LEDs), significantly reducing the power consumption of the sensor from 100mW to less than 5mW.

NDIR sensors are typically tuned to measure the absorption of hydrocarbon (C-H) bonds at 3.4 or 3.33 microns, which are suitable for most hydrocarbon gases. Due to its diatomic structure consisting of only two similar hydrogen atoms, hydrogen (H2) gas does not absorb infrared radiation and will not be measured by an NDIR combustible gas sensor. Further, since the NDIR sensor is targeted for absorption at a specific micron wavelength, some gases, such as acetylene, will not be detected. However, when an NDIR sensor is used in a multi-gas instrument, both hydrogen and acetylene gas can be detected through cross-sensitivity with the carbon monoxide (CO) sensor, as shown in Table 1:

Dual-beam/dual-detector sensor designs (Diagram 3) provide a fail-safe method to detect when either the transmitter or the receiver components fail. Since the sensor cannot be poisoned like catalytic beads, only a blocked sensor would prevent the sensor from indicating a problem. The redundancy also serves to minimize signal drift, which allows for testing, calibration and maintenance cycles of six months or more. 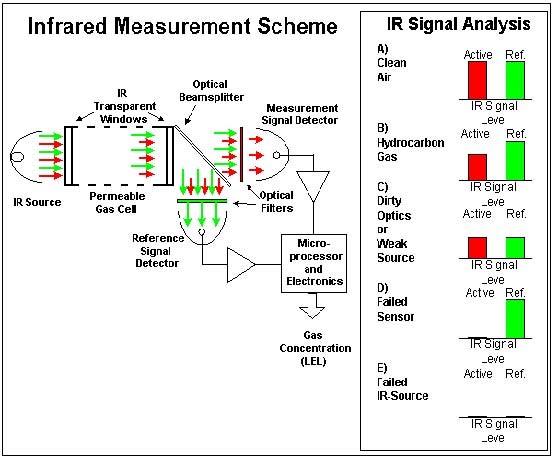 As previously mentioned, NDIR sensors are more responsive to larger hydrocarbons than to smaller ones. This is opposite of catalytic bead sensors which has caused many multi-gas manufacturers to recommend calibrating to pentane or hexane in order to compensate for the catalytic bead sensor’s lack of sensitivity to heavier hydrocarbons. NDIR equipped multi-gas instruments calibrated to methane will allow increased sensitivities to larger hydrocarbon gas while not having to deal with the problems associated with calibrating to an uncommon and non-target gas. This difference in catalytic bead and NDIR sensor response to the alkane chain of hydrocarbon gases is demonstrated in Diagram 4:

While the initial cost of infrared sensors is typically slightly higher than that of catalytic bead sensors, the medium to long-term costs favor the infrared sensor. However, the LED-driven NDIR equipped multi-gas instruments are now available in the mid-$700 range and are more compact and easier to use than those equipped with the catalytic bead sensors previously available. The photodiode-driven infrared sensor fails to a safe condition compared to the catalytic bead which fails to an unresponsive condition, requiring significant field maintenance (frequent bump testing and calibration) to ensure it is still functioning. Catalytic beads can detect more combustible gases which may make it the more appropriate choice in certain applications. NDIR sensors are usable in inert atmospheres, whereas the catalytic beads require oxygen to operate. A summary of the sensor differences in shown in Table 2:

With more workers requiring confined space entry than ever before, safety during these industrial operations is critical. Using the latest, most advanced technology to overcome the limitations of older sensor designs ensures the safest conditions for workers, residents in the surrounding areas, and the environment. For combustible gas measurement, photodiode-driven infrared sensors are the next generation of safety.